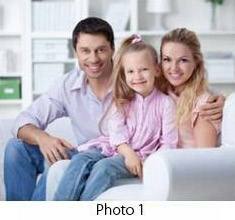 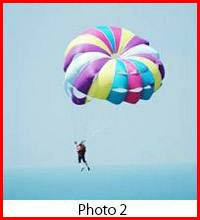 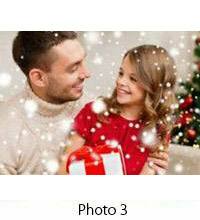 This photo was taken a few years ago in the air.

In the picture you can see my aunt Liza and the parachute. Her parachute is round and consists of wide stripes of parachute cloth painted in different colors. Liza is dressed in a special parachute suit. The sky is blue and the sea is dark blue.

Aunt Liza is soaring in the sky with a parachute.  It looks really cool. She is hanging on the stripes.  She decided to take a few parachute lessons and was absolutely exited about them.

I keep this photo in my album because it reminds me how brave Aunt Liza is. She was always scared of heights but, she found the strength and desire to overcome her fear of it. She is not afraid of heights anymore.

You know. I've decided to show this picture to you because once you told me that you wanted to do something breathtaking like, learn how to jump with a parachute. I thought Aunt Liza could give you some advice.

Now you know what my Aunt Liza can do. Hope you will enjoy meeting her.