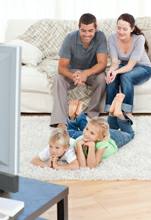 This photo was taken a few years ago in one of Moscow’s streets at a fair that was not so far from my house.

In the photo you can see my aunt Liza and my uncle Oleg. Aunt Lisa is wearing a green kaftan and long read skirt with a beautiful pattern on it. She also has on a wonderful headscarf. Oleg is wearing a white Russian national cap called Ushanka. In the background you can see a long fence made of red bricks and some buildings. There is some snow on the ground.

My uncle and aunt are standing together dressed in Russian national costumes. Uncle Oleg is standing next to her and looking at the fair. He is pointing at something that is far away.

I keep this photo in my album because my aunt and uncle look really happy and cute here. I like to see them like this. Especially, when they are dressed in national Russian clothes.

I decided to show you this picture to you because once you told me that you would like to organize a school play, with national costumes and so on. Aunt Liza knows a lot about theater. So I thought she could give you some good advice or even help with the organization.

Now you know what my aunt and uncle look like. Hope you will enjoy meeting them.